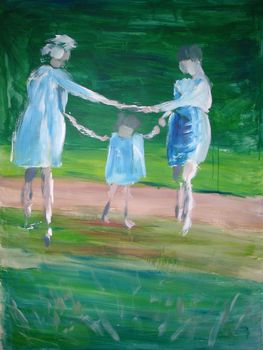 Here I am at the end of week two of college, and I’ve only just started painting again!  This is the start of a large painting.  I plan to do a series of these large ‘paint sketches’ in acrylic on card, and then decide whether to continue the series in oil on canvas.

The last week at college has been busy and somewhat chaotic.  Timetables are still being ironed out, but we are getting there.  I took the girl with pram painting for a group critique.  This was anonymous (which felt scary!) i.e. the group didn’t know whose painting it was, but just said what they saw.  They did say that it evoked feelings of memories or dreams, but also that there was still something ‘unfinished’ about the painting.  I think it definitely gives me a starting point at least.

2 thoughts on “Painting in progress”