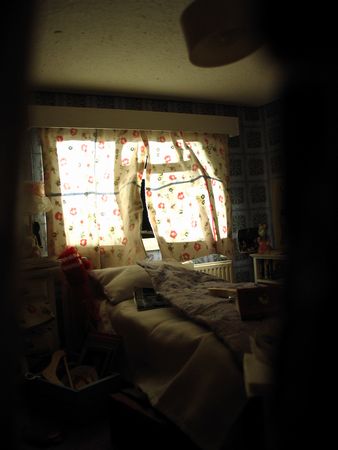 For Mythologies, the Haunch of Venison have taken over a fantastic building at 6 Burlington Gardens in London.  This used to be the Museum of Mankind, housing the British Museum’s ethnographic collections from 1970 to 1998.  Responding to the history of the building, Mythologies turns the whole building into a kind of Cabinet of Curiosities, using the paraphanelia of the ethnographic museum to re-present and reflect on the stories of our lives.  Wandering around the exhibition, I was encouraged to peek into spaces, gasp at detail, wonder at the inexplicable and make up my own stories.

Highlights for me included Jamie Shovlin’s ‘Family Album’, a dark room containing a wooden crate in one corner; in another corner an overturned vintage Pampers box with junk spilling out, lit up by a clicking slide projector; and some shelves above head-hight with more vintage ‘junk’ piled around a box.  I wandered around them in the dim light, wondering what stories the various items could tell.  Then I noticed light shining out from a slit at the bottom of the Pampers box, and I wondered whether I could see in.  The picture is what I saw – a tiny, jumbled bedroom, looking as if someone had just left the room.  It reminded me of Tracey Emin’s bed in its dishevelledness, and in my feelings of intruding.  On further exploration, I found lights shining out of tiny corners in the crate and in the box on the shelf, both of which revealled tiny interiors, dimly lit and dreamlike, or more like something out of a horror movie (an impression further enhanced by fragments of a movie soundtrack playing in the background, and by the click of the slide projector).  It was entrancing, but also disturbing.

Also entrancing, but in a different way, was Tim Noble and Sue Webster’s ‘Wall of Shame’.  On a plain white wall, etched white brass cut-out shapes like paper cut-outs hung suspended from nickel wires.  A light projector on the floor, slightly to the side of the hangings, cast a light across the wall, casting shadows.  The effect was to make the brass plates almost invisible, throwing the focus onto the shadows which looked like drawings on the wall.  Some were sketchy, some were very graphic.  Little scribbled figures cast their own shadow in the ‘drawing’, literally drawing attention to the process of their making.

Then there was Polly Morgan’s ‘Carrion Call’ – a battered wooden coffin, which from a distance appeared to have barnicles or fungus growing from various crevices.  On closer inspection, these resolved themselves into tiny hen chicks, beaks open, clamouring to get out.

Almost everything in the exhibition stimulated some sort of wonder, and I was particularly spellbound by Bill Viola’s ‘Incarnation’, a video portrait in which a naked man and woman walk towards us, viewed in a kind of fuzzy focus as if the channel was not properly tuned.  One of the figures puts out a hand towards us, and a flow of water breaks around their hand.  In slow motion, their bodies move towards us through a wall of breaking water, until they stand before us naked, vulnerable and dripping.  As they meet our eyes, we feel we are intruding, and become hyper aware of their discomfort at our gaze.  It spoke to me of Adam and Eve, the way we survey each other, and of our own vulnerability.

I won’t spoil any more suprises.  If you possibly can, go and see this exhibition for yourself.  It’s on until 25th April 2009, and it’s FREE!