This is the old packhorse bridge in Hebden Bridge.  I sat sketching it in the sunshine this afternoon while Rick ate his sandwich.  We were surrounded by screaming children who were chasing pigeons and being constantly told not to go in the water.  Some mothers attempted to get a photo of a group of toddlers, and I tried to sketch them before they moved – impossible!  You can just make them out at the front of the picture.  The children were very interested in my drawing, snatching sneaky looks as they went past. 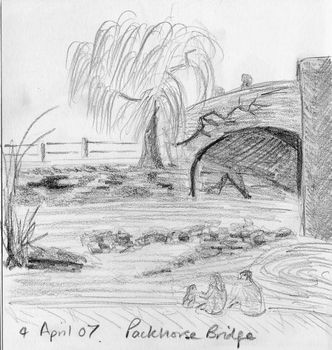