In this, curator Catherine Wood describes how Pollock’s work was seen as a key point in the history of performance, because “the film of Pollock making the painting became as important arguably for the next generation of artists as the finished object.”

Describing the current generation of artists, she says “paint and the canvas are still present – it’s just in a more performative way; a more theatrical way.”

I’ve been hunting around the web for information on sourcing artists’ materials ethically.  It is extremely difficult to find any information.  From what I’ve managed to find, here is what I could do to mitigate potential impacts (environmental, social, and animal welfare).  I’ll update this post as I find new information. END_OF_DOCUMENT_TOKEN_TO_BE_REPLACED

An exhibition held at Metro Gallery in Melbourne – Climate Change: The Wonder and the Dread.  “Their creative process was filmed over several months as part of a long term documentary by award winning film maker Alan Woodruff and Deakin University Professor, Ann McCulloch.”

“We are investigating audience response to the art works (and whether the art persuades in a manner not otherwise achieved through intellectual means), and the processes involved in the art making itself.

We think insights communicated in images and metaphor might contribute to the development and implementation of environmental policy by communicating in ways that have not been achieved by science communication.”

From article by The Conversation.

Landscape painter, showing how glaciers have changed over time.  See The Scientist and Treehugger.com articles.

I’ve not posted a picture for a while … so here’s a peek at what I’m doing in the studio. 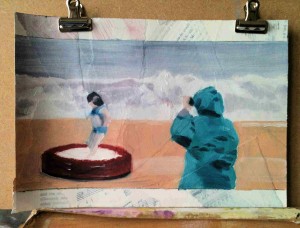 Beautiful piece of immersive theatre at stage@leeds last night.  David Shearing’s and it all comes down to this … made my throat ache with the beauty of it.  It offered nostalgia, melancholia, and a deep reflective sense of the expanse of time and space.  David’s voice invites you to explore a world both inside and outself yourself, where text folds in on itself, becomes form, and takes flight.  Like being led into a lucid dream.   A real gift.

Interested in how Gormley explores our experience of body in space. Gormley on TED

Arriving at the Tate Modern, I look down into the Turbine Hall.  There is a group of people scuttling around like ants or atoms, avoiding each other, in constant motion.  The ‘milling’ seems to be busy, without purpose.  Bodies walk quickly in random movements, individuals ‘bunched’ into a group, related to each other by their inexplicable behaviour.  I shrug, and go and look at some art. 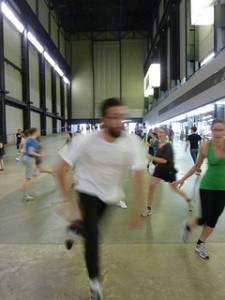 Photo: ‘Active’ by a princess on Flickr, used under a Creative Commons license

Later, I exit into the Turbine Hall.  Several rows of people jog past, down the length of the hall.  I follow them at a more sober pace (although I feel a strange urge to jog after them).  I stop as they turn and start to run back towards me.  I want to feel the current of air as they pass, to feel the strangeness of being amongst these purposeful bodies.  I’m a spectator, but a ‘sensing’ one – the spectacle is an embodied experience.

A figure breaks out of the group and runs with purpose towards me.  She is breathing heavily, and sweat shines on her face.  She smiles, makes eye contact, and talks breathlessly about the place she calls home.  A body, a living, breathing, sweating body confronts me with the intimate details of a lived life – the place she calls ‘home’.  I find myself wondering what place I would call home.  I’m plunged into intimacy with a complete stranger, and yet she seems not strange any more.  Her look is warm, her smile engaging.

Suddenly, her face goes blank.  She turns and joins the mass of bodies now walking past; is swallowed up by their glassy stares.  I am alienated, reduced to observer.

This experience is repeated several times as the Body of bodies slows to a shuffle.  As it advances – slowly – the lights switch off one by one.  By the time they reach me, we are in darkness.  The feeling is undead, uncanny.

The repeated alienation juxtaposed with intimate personal encounter makes me reflect on the ‘alienation of the other‘ – the amorphous Body that we don’t know personally – whether they be ‘bankers’ or ‘hoodies’.  A body that emerges from the ‘Body’, with real lungs and sweat glands to tell me their most personal stories about their homes or mothers, can challenge that alienation.  A Body of strangers can move with purpose or seeming randomness – but that one individual can suddenly spin out and confront me reminds me that the ‘Body’ is made up of people who share the humanity of being a physical body in space, with purposes and passions.  What makes the ‘Body’ behave the way it does when it is a collection of individuals?  It is probably a function of some rules the individuals have agreed, and affected by the responses of the participants that they encounter in the ‘performance.’   Sounds kind of familiar.

‘These Associations’ is an artwork created by Tino Sehgal and can be found in the Turbine Hall of the Tate Modern until 28 October 2012.